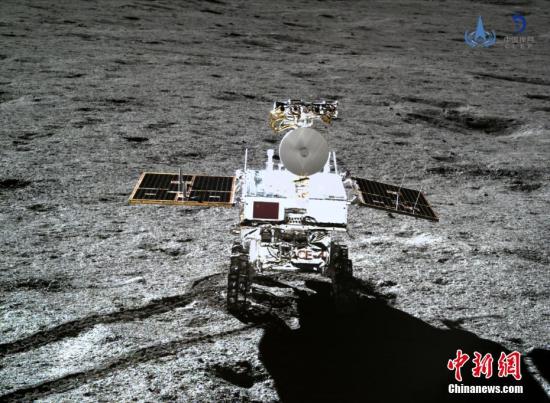 Image of China's lunar rover YuTu-2 taken by a camera on the lander of Change-4 probe. (File photo/China News Service)

(ECNS) -- China's lunar rover YuTu-2 has traveled a total 357.695 meters after landing on the far side of the moon via Change-4 probe on January 3, 2019, the Lunar Exploration and Space Program Center of the China National Space Administration announced Friday.

Both lander and rover of the Change-4 probe completed the 13th lunar day at 2:11 pm and 8:30 pm on Thursday and switched to dormant mode.

Equipped with a panoramic camera, neutral atom detector and lunar radar, the rover obtained a large amount of scientific data.

The Change-4 probe successfully landed in a pre-selected zone on January 3, 2019, and returned the world's first close-up image of the moon's far side.

It made the first soft landing on the far side of the moon and the first relay communication between it and Earth.